Corallopyronin A – an antibiotic active against Helminths, Staphylococci and STIs

Humans and companion animals are exposed to helminths causing diseases. This invention addresses filariasis (elephantiasis and river blindness) in humans and dirofilariasis (heartworm) in pets.

Current drugs to treat humans, diethylcarbamazine and ivermectin, mainly kill larvae. Because adult worms are long lived and fecund for most of their lifespan, endemic populations must be treated for many years. Suboptimal responders have been observed, indicating possible resistance development.

Dirofilariasis is endemic in most of the USA, especially in the South. Prophylactically, the macrocyclic lactone (ML) ivermectin is given to prevent transmission. If pets are infected, Melarsomine is administered to kill the worms. Ivermectin loss-of-efficacy in dogs has been reported, indicating possible resistance to ML. Melarsomine may cause severe side effects – one of the reasons why Melarsomine is not used for humans.

Human filariasis is caused by the nematodes B. malayi, W. bancrofti and O. volvulus, transmitted by bloodsucking insects. Dirofilariasis is caused by the nematodes Dirofilaria immitis and D. repens transmitted by mosquitoes. All species harbour Wolbachia endobacteria that are essential for worm development, fecundity and survival. A promising approach to treat filarial infections is to target the Wolbachia by using Corallopyronin A (CorA). Human application: Doxycycline or rifampicin are recommended to deplete Wolbachia from adult worms. However, doxycycline is contraindicated for children and widespread use of rifampicin, the recommended tuberculosis drug in African countries, may drive resistance development. CorA is a beneficial alternative to doxycycline or rifampicin for treating filariasis. Veterinary application: Potential therapeutic agent with a slow adulticidal effect, CorA would prevent pulmonary thromboembolism after the death of heartworms. Quick killing causes a strong inflammatory reaction, e.g. reactions seen after treatment with Melarsomine, which can cause death of dogs. Targeting Wolbachia endobacteria with CorA significantly reduces development of resistance, because transfer of a plasmid to Wolbachia from extracellular bacteria is impossible. CorA inhibits bacterial DNA-dependent RNA polymerase, with a mode of action different from rifampicin. Experiments in rodents showed that CorA depleted >98% of Wolbachia from the worms, resulting in blocked larval development and worm death. Thus, CorA can potentially eliminate filariae or filarial disease by killing larvae as well as adult worms.

The production process is optimized to achieve a cost-effective, high purity API at industrial-scale, the development of an oral formulation is ongoing. With technical grade CorA we conducted in vivo efficacy studies, and various non-GLP ADME and in vitro toxicity studies e.g. plasma stability, metabolism in hepatocytes and microsomes, UGT-phenotyping, CYP induction, CYP450 inhibition, PPB, Caco2 permeability and SIF stability. 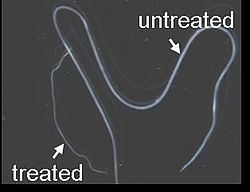 Litomosides sigmodontis infected mice were treated with CorA or vehicle for 28 days. After 35 days the mice were euthanized. The success of the CorA treatment can be seen by the shorter worms compared to the untreated vehicle control.