Treatment of PCOS or oligo-ovulatory androgen excess in women

Oligo-ovulatory androgen excess in women or polycystic ovary syndrome (PCOS) is an endocrine disease that currently affects 5–10% of females of reproductive age and is a prime cause of female subfertility. The 2016 an 112.2 million (NIH criteria) to 186.9 million (Rotterdam criteria) prevalent cases in females aged 15–49 years worldwide were estimated and this is expected to increase.

In generally PCOS shows a minimum of two of the three conditions, which include absence of ovulation, causing no periods or irregular menstrual periods; signs of high androgens or high levels of androgens; and/or cysts on a single or both of the ovaries. Polycystic ovaries (PCO) are enlarged and contain many follicles that are increased in number from the earliest growing stages and they intrinsically overproduce androgens, while resistance in the insulin-stimulated glucose uptake pathway in the ovaries of insulin resistant women may reduce energy availability for the growing follicle and the maturing oocyte, contributing to defects in folliculogenesis.

In adolescent girls, this PCOS is the most common cause of hirsutism (with or without acne and seborrhea) and menstrual irregularity. It is further associated with hypertension, cardiovascular diseases, type 2 diabetes, obstructive sleep apnea, hepatic steatosis, insulin resistance, metabolic syndrome obesity, mood disorders, and inflammation. Women with PCOS have an increased prevalence of markers of subclinical atherosclerosis including increased carotid intima media thickness (IMT), increased coronary artery calcification, and endothelial dysfunction compared to control populations and there is an increased risk of endometrial cancer in the PCOS population and they are more likely to have increased depressive symptoms and depression compared to controls.

Low-dose combination of pioglitazone-spironolactone-metformin (PioSpiMet) for the treatment of oligo-ovulatory androgen excess in women or Polycystic ovary syndrome (PCOS), especially in adolescent girls or women of childbearing age with hirsutism and oligo menorrhea and with no need for contraception.

The global polycystic ovary syndrome drugs market revenue is estimated to reach US$ 1,154.8 Mn by 2024, expanding at a CAGR of 4.6% during the forecast period (2016–2024). Growth of the global PCOS drugs market is mainly driven by increasing prevalence of the disease and a growing awareness among the patient population. As PCOS often leads to hirsutism, obesity, and infertility and hence the need for effective management of associated diseases, this is likely to boost the demand for PCOS drugs. In addition, a growing popularity of combination drugs and their rising adoption among the patient population is expected to boost revenue growth of the PCOS drugs market in the coming years.

Polycystic ovary syndrome (PCOS) is a serious problem among women of reproductive age. Moreover, it is an increasingly prevalent disorder in adolescent girls, commonly presenting with hirsutism/oligo menorrhea, commonly treated with an oral contraceptive (OC), and commonly followed by oligoanovulatory subfertility. This contraceptive drug class segment is expected to witness 1.6X increase in revenue by the end of 2024 and is projected to register a CAGR of 5.4% over the forecast period – reaching a market value of US$ 355.7 Mn by the end of 2024.

There is a clear, unmet need for treatments targeting the paediatric and adolescent patient population with PCOS. No therapy has been yet approved by the Food and Drug Administration (FDA) or by the European Medicines Agency (EMA) for PCOS in adolescent girls.

The PioSpiMet with its low dose combination of pioglitazone-spironolactone-metformin had no noteworthy side effects while it induced a 2.5-fold higher ovulation rate, 6-fold higher normovulatory fraction, and 65% lower oligoanovulation risk than after OC treatment. Moreover, visceral fat and insulinemia normalized only with PioSpiMet. Hepatic steatosis is common in adolescents with obesity and PCOS. The higher post-treatment ovulation rates related to more on-treatment loss of hepatic fat.

Proof of concept in clinical trial 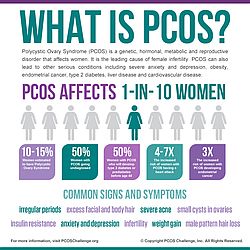