Centre for Transfer of Biomedical Technologies

Promising strategy for the treatment of neurodegenerative diseases like Alzheimer´s Disease since it combines both current symptomatic approaches – cholinergic stimulation and glutamateinergic inhibition.

Tacrine is able to interact with a very wide spectrum of targets and pathways. However, its modulatory effect at NMDARs is not commonly discussed as one of the mechanisms which play an important role for the AD therapy. The NMDARs play a key role in long-term potentiation (LTP), learning and memory formation. However, overstimulation of NMDARs leads to excessive release of glutamate and excitotoxicity resulting in neuronal loss. Indeed, the NMDARs represent an alternative target for the treatment of AD since glutamate-induced excitotoxicity is thought to be responsible for cell death and neuron loss frequently associated with the disease. A two stage model of AD progression in regard to NMDAR function was proposed. In the early stage of the disease, overstimulation of NMDARs is manifested, caused by e.g. Aβ-mediated activation of NMDARs resulting in neuron death in the nucleus basalis Meynerti and loss of cholinergic projections, disrupted energy metabolism, etc.. Especially, tonically active extrasynaptic NMDARs would be predominantly at risk of overstimulation. In the later stage, when NMDAR excitotoxicity is advanced, the loss of NMDAR-bearing neurons occurs resulting in glutamatergic hypoactivity. There is a vast number of pharmacological compounds which negatively modulate the function of the NMDARs, including competitive (e.g., D-APV; kynurenic acid), allosteric (e.g., ifenprodil; spermine) and uncompetitive (also called “open channel blockers”; e.g., memantine, ketamine; MK-801 and Mg2+) antagonists.

The pharmacokinetic study revealed that the compound is available in the brain (Tmax= 20min) and reaching the concentration ≈10 µM after the administration of 10 mg/kg to the rat (figure 1). The dose 10mg/kg was found as safe dose, however the dose 20mg/kg evoked only minor side effect in the rat mode. The brain/plasma ratio was found aproximately 7%. The neuroprotective ability of the compounds to prevent or treat neuronal damage caused by the NMDAr overstimulation was confirmed by the permanent lesion of hippocampus induced by a microinjection of NMDA (figure 2).

In vitro and in vivo experiments 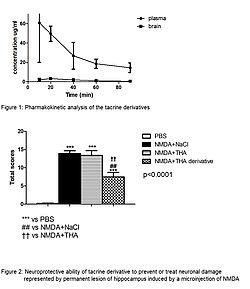