The low rates of healing in lymphomas, severe side effects, and frequent recurrences in specific patient groups are indications that the search for new potential drugs for monotherapy and combination therapy is still ongoing.

Researchers of the Medical University of Vienna and the University of Vienna have identified highly active synthetic chalcones derived from the chalcone scaffold. These cytotoxic compounds were found and developed by modifying the chalcone lead structure concurrent with in vitro tests to evaluate their cytotoxic potential in different cancer cell lines. Compounds were thoroughly tested regarding their efficacy in inhibiting proliferation and viability in cancer cell lines of the hematopoietic system.

Partnership - all-size biotech and pharmaceutical partners with a complementary expertise in oncology drug development, in order to support the preclinical development of the anti-cancer small molecule via a co-development agreement and/or license agreement, or purchase 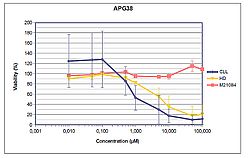 Impact of APG38 on the viability of primary cells from CLL patients (N=10) and healthy donors (N=2), and the mouse fibroblast cell line M210B4. Cells were incubated in triplicates for 48h before viability was determined. Mean values and standard deviations are shown. Since the x-axis has a logarithmic scale, the vehicle only incubation (= origin - „0“) with the 100% viability reference point is not depicted.