It is undeniable that specific phosphopeptides enrichment is critical for phosphoproteomic analysis. To address needs for phosphopeptides enrichment approach such as high selectivity and simplicity of operation, a high surface area interface, based on anodic one-dimensional (1D) TiO2 nanotubes homogeneously decorated by Fe3O4 nanoparticles (TiO2NTs@Fe3O4NPs) was introduced. The combination of TiO2NTs@Fe3O4NPs with tailored isolation protocol offers an enhanced separation specificity, enrichment ability and possibility to widen the range of identified peptides compared to the established TiO2 microspheres and IMAC-based protocols. Presented material (TiO2NTs@Fe3O4NPs) possesses further unique advantages: it is nontoxic, robust, it can be easily separated from any solution due to its intrinsic magnetism, and being based on TiO2 it can be simply decontaminated by UV-light-induced photocatalytic treatment at low costs and reused again at the same quality. Our results have proved that the material (TiO2NTs@Fe3O4NPs) retains almost exclusively phosphopeptides and shows 50% better preferential affinity for double or triple phosphorylated peptides. Moreover it retains a high number of unique phosphopeptides impossible to be isolated by other techniques. This attribute is fully exploitable mainly for analysis of hyperphosphorylated proteins associated with serious degenerative diseases.

The invention is offered for co-development and licensing. Unique properties of TiO2NTs@Fe3O4NP may open new pathways for the isolation and identification of clinically important biomolecules and for a whole range of in vitro life science applications.

Series of samples were prepared. Their ability to separate selected biomolecules was proven at analytical (trace amount) scale. These materials can be easily up-scaled for preparative use.

Paper recently submitted to Journal of Chromatography A (January 2018). 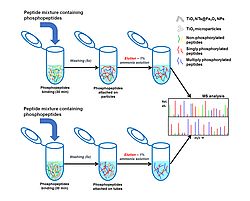