5-Aminosalicylic acid (5-ASA) (mesalamine or mesalazine) and its derivatives (i.e., balsalazide, olsalazine and sulfasalazine) are anti-inflammatory drugs indicated for the treatment of IBD (ulcerative colitis and Crohn´s disease). The number of IBD patients has been increasing in incidence and prevalence with the highest rates in USA (1.6 mil. only in US), Canada, and Europe. 70k new cases of IBD have been diagnosed in US every year in adults and 80k in children. More than 88% of all UC patients receive treatment with 5-ASA in USA as well as in Europe. The use of these agents in therapy over decades means that long-term toxicity is an important consideration. A number of reports have linked oral 5-ASA therapy to chronic tubulo-interstitial nephritis and this relationship is now well established. Whilst the incidence of this adverse event in the population of patients with inflammatory bowel disease is low, the morbidity in an affected individual is high with some cases progressing to end-stage renal failure requiring the dialysis or transplantation. Available data on this serious adverse effects consist of clinical observation and a small, but increasing number of published case reports. It has been calculated that approximately 10% of the patients with 5-ASA nephrotoxicity will develop end-stage renal disease, which emphasizes both the need for timely recognition of renal impairment and prompt discontinuation of 5-ASA treatment of affected patients (efforts in this area can be proved by the patent activity – for example US20160153045A1) and to clearly identify the toxicity principle and develop the safer drug combination which would minimize the adverse effects described and the key patient benefits of the 5-ASA treatment could prevail.

The structural similarity of 5-ASA to paracetamol (acetaminophen) and phenacetin, drugs with well documented nephrotoxic potential, and the nephrotoxicity of 5-ASA in preclinical animal models, lend further support to the hypothesis that 5-ASA does initiate the interstitial nephritis, papillary necrosis and nephrotoxicity of unknown origin. Our results have shown that detoxification products of acetaminophen metabolism and the compounds with structure similar to acetaminophen are able to significantly induce decrease of cell viability (human hepatocellular cell and renal proximal tubular cell models were used). Protection against production of these (nephro-)toxic compounds has been proven with promising results.

The invention is offered for co-development and licensing. Funding from the commercial partner needed for further development of the concept.

Patent application has been in preparation. 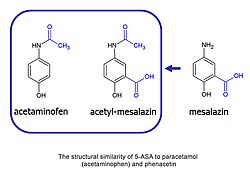