Cancer is a leading cause of death worldwide, accounting for more than 8 million deaths per year with metastases being the major cause of death from cancer (WHO). Most of the existing anti-cancer drugs are not effective enough to provide protection from this disease which is, at least in part, due to the fact that most treatments aim at targeting the growth of the primary tumor rather than processes of metastasis.

Metastasizing tumor cells are capable of inducing necroptotic cell death in endothelial cells during extravasation, a critical step within the complex processes of metastasis. We identified potential target sites within this signaling pathway that offer opportunities for interference with these processes in order to reduce or prevent metastasis.

Commercially available drugs that affect tumor cell-induced endothelial necroptosis were shown to block metastasis in vivo in mouse experiments. Further development of new (classes of) drugs and their testing in clinical trials is needed. 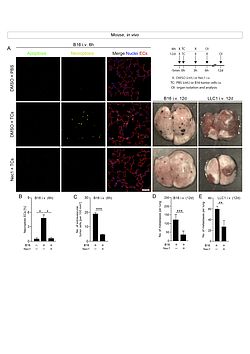