The NF-κB signaling pathway plays a pivotal role in a broad range of cellular processes including cell proliferation and survival and is tightly linked to diseases such as cancer.

The invention provides compositions comprising IKK1 and IKK2 antagonists for use in medical treatments of proliferative disorders, in particular for the treatment of cancer. Most preferred in context of the invention is a gene editing approach for a targeted simultaneous knockout of the genes of IKK1 and IKK2 in a cell associated with the proliferative disorder. Simultaneous CRISPR/Cas9-mediated knockout of IKBKA (IKK1) and IKBKB (IKK2) resulted in cells highly sensitized for programmed cell death (apoptotic/necroptotic) after exposure to tumor necrosis factor (TNF)-α. This effect was not observable in single knockouts for either IKK1 or IKK2. Targeting of IKK1 and IKK2 simultaneously, preferably on the genome level, therefore opens up new therapeutic avenues to tackle proliferative disorders such as cancer. Hence, the present methods and compositions provide a means for the selective induction of apoptosis in cells associated with a proliferative disorder, such as tumor cells.

Novel gene therapy and a novel drug screening concept are offered for licensing.

In vitro experiments have been performed.

European priority application has been filed on August 2, 2017. 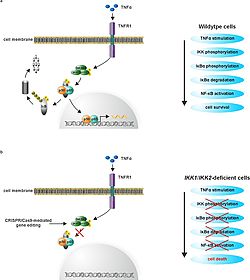