The challenge of intervention in Alzheimer’s Disease (AD) is well understood. AD is a neurologic disorder that kills nerve cells in the brain and causes dementia. It is ultimately fatal. It gradually erodes its victims’ brains. This leads to impairment of memory, communication and independence. Through neuronal cell killing, AD causes an overall shrinkage of brain tissue.

Our project aims to deliver Alzheimer therapy by targeting the beta-amyloid pathway to intervene in this cell death and deliver a disease-modifying therapy.

Our technology is a humanized monoclonal antibody which targets beta-amyloid, which is an integral component of the pathophysiology associated with AD. The key aspect of our anti-amyloid mechanism is the targeting of oligomers, and selectively targeting both truncated 4-42 and pE3-5 (pyroglutamate) species but not 1-42 (the latter may act as a “sink” for antibodies binding to this latter form of amyloid in plaques).

In 2012, combined sales of medications carrying an indication in AD were estimated at $1.6 billion and by 2022 AD drug sales are projected to grow to ~$3.0 billion. Expansion in these markets will be driven by increased access to medical care as a result of healthcare reform, new regulatory guidelines for the approval of AD drugs.

New diagnostic technologies and the integration of presymptomatic AD and MCI patients into the care pathway will result in the growth of the drug-treatable population, whilst drugs with disease-modifying mechanisms will redirect resources to the drug market.

We now have progressed our project to a stage whereby we have a humanised antibody targeting the 4-42 species and pE3-5 (pyroglutamate) species. We also have the relevant, comparable, antibody for the mouse models (along with data in 2 mouse models) which we will be able to share under CDA very soon with potential commercial partners. 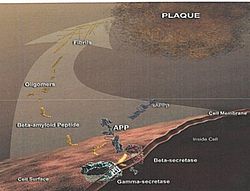 Initially, it was thought to be plaques which caused toxicity and cognitive decline – it is now shown plaques can be cleared with antibodies to 1-42 amyloid and no improvement in cognition is observed. Oligomers of amyloid are considered to be the toxic species rather than monomers or aggregated fibrils. The novel angle in this project is targeting oligomers of early toxic forms of amyloid detected in Alzheimer’s brain but not the plaque: for example 4-42 amyloid oligomers.