Various strategies have been developed for the elimination of pluripotent stem cells utilizing transgenic, immunologic and chemical approaches as well as biophysical techniques. While genetic manipulations are effective but raise safety concerns, pluripotent stem cell ablation by immunologic targeting is safe but less efficient because single-cell dissociation is required.

In this regard, the most promising strategy is the chemical ablation of undifferentiated cells in pluripotent stem cell-derived populations using small molecules such as toxins.

The problem is solved by a method of eliminating the number or percentage of pluripotent stem cells or of enriching differentiating or differentiated cells in a cell population.

A further advantage of the diamines is that the compounds are readily available and show significantly higher pluripotent stem cell-specific cytotoxic activity in comparison to known small molecules.

On behalf of University of Cologne, PROvendis offers access to rights for commercial use as well as the opportunity for further co-development.

First in vitro results of murine and human cells are available.

A European patent application has been filed recently. Worldwide patent protection is possible. 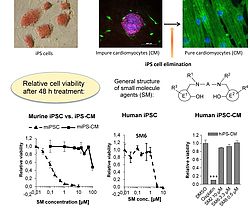